So you're going to a Muckdogs game, but you're just not sure who you should be paying attention to. I am the main writer and founder of the blog FutureRedbirds.com, and as someone who tracks the farm system very closely but doesn't have the privilege of being in driving distance to Dwyer Stadium, here are the players I'd be watching keenly at each game if I were you: 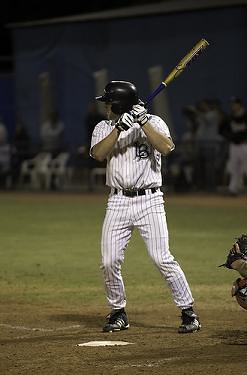 Shane Peterson, OF---Shane Peterson was drafted this year in the 2nd round out of perennial powerhouse Long Beach State University, a team that featured 8 players drafted in the first seven rounds, and has recently helped produce rising hitting stars Troy Tulowitzki and Evan Longoria. Peterson was the first of the many Dirtbag players selected on draft day. The sweet-swinging lefty played first base and pitched in college, and has the speed and arm to hold down a corner outfield spot. Peterson was among the leaders in the Big West Conference in batting average (.390) slugging percentage (.582) and he led the conference in on-base percentage (.506). Being a rather statistically-inclined club as the Cardinals are, they jumped on him on draft day. Not everyone in scouting circles are sold on his hitting ability in spite of his tremendous college stats, as Peterson has an unorthodox hitting approach; he holds his bat up by his ear and uses a two-step swing. He does however generate excellent bat speed and has a high finish, allowing him add loft to the ball. Whatever he is doing is working so far in his first taste of pro ball, as Peterson is currently batting .379, the second highest average in the New York Penn League.

Jon Edwards, OF---Edwards fell to the 14th round of the 2006 draft in part because he was ineligible for the first half of his senior season in high school. The Cardinals went well over slot to sign him, giving him a bonus of $100K. He is a serious physical specimen, standing at 6-5 and 230 lbs. He has as much raw power as any Cardinal hitter in the system, but as with most high school players, he came to the club quite raw and is still a work in progress. In his first minor league season he hit .266/.360/.461 (AVG/OBP/SLG) for rookie league Johnson City and was ranked a Top 10 Appalachian League prospect by Baseball America. He returned to the Appy League in his 2nd pro season, but had trouble making contact, batting only .245. He still showed the ability to take a walk and hit for power, and was moved up to Batavia at the end of the 2007 season. In his short time at Batavia, Edwards went 13-for-33 with 5 extra base hits. That hot streak has carried over so far this season; he's sixth in the NY Penn League batting race (.358) and is leading the league in slugging percentage by a wide margin, with a whopping .736. Edwards profiles as a "Three True Outcomes" hitter; the Three True Outcomes being a homer, walk or a strikeout, a la Adam Dunn. He has a long swing but generates lots of power, but has good pitch recognition for a 20 year old hitter. He has a strong arm in right field, but has below average range.

Other names to know, hitters to watch

3B Jermaine Curtis was the club's 5th round pick in 2008 out of the University of California. He is known for having a fine glove and a keen batting eye, and his 42 walks were the most drawn by any Bruin since Troy Glaus drew 57 in 1997...1B Xavier Scruggs was an uncertain sign as a junior and therefore fell to the 19th round this past June, but was ranked the 197th best draft prospect by Baseball America. For UNLV he hit for the Mountain West Conference triple crown. He’s strong and quick to the ball, and has sound plate discipline, but has struggled mightily thus far...19 year old catcher Luis De La Cruz was ranked the clubs' 30th best prospect by BA headed into the 2008 season, particularly for his all around defensive skills behind the plate. He struggled for the low A River Bandits and was demoted to Batavia...CF Frederick Parejo was signed out of Venezuela as a 16 year old free agent two years ago and is developing fairly rapidly. He was the talk of Extended Spring Training amongst the Cardinal coaches and scouts, and was rewarded with an aggressive promotion. He's considered a pure center fielder. 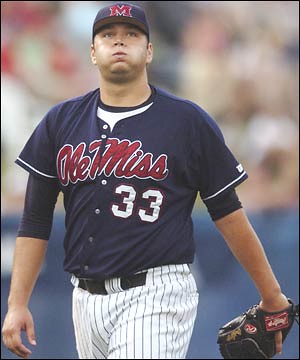 RHP Lance Lynn---Lynn was the Cardinals supplemental round pick this past year out of Ole Miss. The Indiana native was originally drafted by the Mariners in the 6th round of the 2005 draft but opted to go to school. That decision paid off handsomely. For the Rebels this past season he posted a 4.52 ERA with 110 strikeouts to 30 walks over 89.2 innings. He has a potential for two plus pitches-a fastball at 92-93 and a sharp curve, and profiles as a middle of the rotation innings eater. He has terrific mechanics and also throws a slider and a change-up, although both are inconsistent offerings at this point. Lefties had no troubles hitting Lynn in the SEC last year, so he'll need to work on getting more consistent with the change.

RHP Scott Gorgen---His twin brother Matt is currently Muckdog rival Hudson Valley's closer and pitched for the U of Cal.; Matt was taken in the 4th round this past June out of UC Irvine, and was the higher regarded of the two. For the Anteaters this past spring, Gorgen was 12-3 with a 2.26 ERA and had 123 strikeouts to 40 walks in 115.2 innings. His fastball is in the 87-90 MPH range, and tops out at 92. His change-up is his bread and butter and he'll throw it often and in any count. It's a "plus-plus" pitch and was considered to be one of the best change-ups in this past draft, if not the best. Gorgen can locate the pitch wherever he wishes and it has late tumbling action, much like a split-finger fastball. The main knock on Gorgen is he's short and stocky at 5-10, 190, and he doesn't have much of a breaking ball.

RHP and Closer Adam Reifer---Reifer was drafted in 2007 in the 11th round out of UC Riverside. He was considered a top two round talent but fell due to injury concerns surrounding his pitching elbow and shoulder. He had a bone spur removed in his elbow and shoulder tendinitis, and the Cardinals have been very cautious with him. Before the injury Reifer was throwing 91-94 with regularity, and has touched up to 96 MPH. He also has a hard, late breaking slider. After witnessing the amount of college closers taken in the first few rounds in this past draft, Reifer could be a huge steal.

Other names to know, pitchers to watch

RHP Jason Buursma was the Cards 25th round pick out of Bucknell U. He was a Brooks Wallace Award finalist, one of college baseball's top honors. A two-way player, he hit .367 with 13 homers as an outfielder as well as posting a 9-3 record with a 2.58 ERA as a pitcher. He throws submarine style...RHPs Arquimedes Nieto and Miguel Tapia were two of the top pitching prospects from the Cardinals Dominican Summer League last season. Nieto is a Panamanian product who had 56 strikeouts to only 13 walks with a 2.73 ERA in 59.1 innings for the DSL Cardinals in 2007. In the exact same amount of innings, the 20 year old Dominican Tapia had 57 K's to 29 walks and 3.34 ERA. Although Nieto has shown better command, the organization considers Tapia to have the higher ceiling of the two.