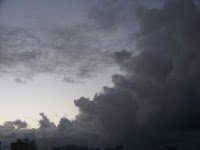 JOE: Good morning Calliope.
CALLIOPE: Good morning Joe. How are you today?
JOE: Wondering about suicide bombers.
CALLIOPE: What brings them to mind?
JOE: A program I happened on this morning on TV about the psychology of suicide bombers.
CALLIOPE: What was the jist?
JOE: Sometimes cells of people with similar thinking form bonds not necessarily at the behest of al Qaeda or other influence.
CALLIOPE: How do they get to suicide bombing?
JOE: They seem to form tight bonds beyond consideration of family or even strangers and depersonalize others. The group bond becomes the only thing in their life.
CALLIOPE: How does the suicide part fit it?
JOE: If they explained that, I missed it. The program stressed the importance of the group bond but did not address other motivation.
CALLIOPE: Does it make sense to you?
JOE: No. But then I'm not a suicide bomber. It's hard for me to even imagine.
CALLIOPE: Perhaps it is too complex to understand. Once people explode themselves it's too late to explore their motivation.
JOE: I agree. Another of life's mysteries at least for now. Talk with you tomorrow.