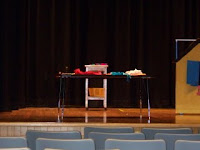 I know that you believe you understand what you think I said, but I'm not sure you realize that what you heard is not what I meant.~Robert McCloskey

JOE: Good afternoon, Calliope.
CALLIOPE: Good afternoon Joe. Did you sleep in?
JOE: Not this long. I was busy getting some exercise and ordering a new computer.
CALLIOPE: I see. Sounds like you have communication on your mind.
JOE: Here's a little story. My girlfriend received an MP3 player for Christmas. She asked me to load some songs on it for her.
CALLIOPE: Sounds simple enough.
JOE: I thought so too. In order to load songs, the device must be synchronized with Windows Media Player (WMP). Although the computer recognize the device as attached, WMP did not.
CALLIOPE: A problem.
JOE: Indeed. The directions referenced a website URL where all was to be explained. Of course there was no such site attached to the URL.
CALLIOPE: Still stuck.
JOE: Well, I found the site eventually and downloaded a PDF manual for the device. The first instruction advised opening a file which does not seem to exist.
CALLIOPE: Customer Service?
JOE: There was no number to call but I did find an e-mail address. My post was acknowledged but no help has been forthcoming. After much ado I discovered that the files I wished to download had indeed ended up on the device along with quite a few other files I did not wish to download. They were a mishmash instead of being in any particular order.
CALLIOPE: So now what?
JOE: I'm done. We agreed that it is going back to the store in favor of something with directions which make some sense. Talk with you tomorrow.