posted by Howard B. Owens in fire, Erie County.

Several fire companies on the west side of the county are responding mutual aid, either directly to the fire, or as fill-ins, to a house fire in the Peter's Corners area of Alden, Erie County.

posted by Howard B. Owens in batavia, crime, Erie County.

A Batavia mother who tried to kill her baby was sentenced to three-and-a-half years in prison yesterday in Erie County.

Marcia Mitchell tried to smother her baby while they were at an Erie County hospital following a house fire in 2008.

“I realize I made a horrible mistake. I miss my children exponentially,” Mitchell told the judge.

Mitchell, 29, said that at the time of her crime, she was “under extreme stress,” with both of her daughters hospitalized. She said she got no help from family members after her Batavia flat was destroyed in an April 2008 fire.

Unless experts determine otherwise, Mitchell will not be able to see her baby until 2019.

posted by Howard B. Owens in batavia, crime, Erie County.

A Batavia woman wanted connection with alleged drug dealing at two strip clubs in Erie County has been arrested.

Cynthia Sims, 25, was initially considered a fugitive following the FBI investigation, but Sims was reportedly taken into custody yesterday.

Twenty-five other suspects have also been charged in connection with the investigation.

The exact charges against Sims have not been released yet.

posted by Howard B. Owens in accident, corfu, Erie County.

A 22-year-old Corfu woman reportedly lost control of her car while driving on Walden Avenue in Lancaster this morning. He car slid on snow-covered roads, crossed into oncoming traffic, and struck a snowplow.

Lindsay Burleson died as a result of her injuries.

The 7:45 a.m. accident occurred between Ransom and Town Line roads.

The driver of the snowplow was not identified.

(via the Buffalo News)

A Gasport man was taken to the hospital this afternoon after suffering burns to his head, face, neck and hands when a fire broke out in a barn in the town of Batavia, Genesee County sheriff's deputies said. Twenty-nine-year-old James Putnam Jr. is recovering in the burn unit of the Erie County Medical Center at this hour.

Fire crews from the East Pemrboke volunteer squad were the first on scene at 9161 Wilkinson Road, where reports had come in shortly after 12:30 p.m. of a fire in the storage barn. Firefighters found flames coming out of the structure when they arrived shortly thereafter. Putnam was immediately taken to the hospital by city of Batavia ambulance.

Batavia, Darien, Alexander, Corfu, Oakfield and Elba also sent crews to the scene, and the fire was extinguished before it spread to an unattached house. The barn and everything inside of it were destroyed in the blaze. The barn is owned by Gabriele J. Miller, of 9161 Wilkinson Road.

"The preliminary investigation into the cause and origin of the fire indicates that the fire is accidental and was a result of the work that was being performed inside the workshop at the time of the fire," deputies said. Genesee County's Office of Emergency Management assisted in the investigation

Every morning, I spend a good hour or so perusing the local media sites, looking for the stories most relevant to the folks of Genesee County. Links to those articles are then included in our Regional Headlines section down here to the right.

Often, there's that one story that deserves more than a cursory mention. For a while now, I've wanted to pick out that one article or news clip that deserved a bit more attention and bring it to you in the full light of our central blog well.

Today is the day we start that service. We hope you enjoy it.

An article this morning in the Buffalo News tells the story of a young man from a small town on the northern shore of Lake Erie. Reporter Chairty Vogel writes the tale with a sure hand and finesse enough to make it come alive.

He burned with artistic fire. But he lived a tough life, and died at a heartbreakingly young age.

Asa Ames was, in many ways, the James Dean of American folk art.

And he lived his entire life — just 27 years — right here in Western New York, in the Town of Evans, where today his simple slab tombstone lies toppled over in a country graveyard, crumbling and neglected.

That was in 1851. Now, Ames will be honored in an exhibit at the Abby Aldrich Rockefeller Folk Art Museum at Colonial Williamsburg in Virginia.

Vogel truly does a tremendous job with this story, which she recognizes as much more than a tragic tale of a talented young man who died too soon. This is the story of undiscovered talent—small town talent—that Vogel so aptly describes as "hauntingly personal." Ames was working outside of the mainstream, away from the city centers in a medium—wood—that was for the most part unappreciated at the time. He is the quintessential outsider. Like Georg Büchner and Henry Darger, Ames was not understood by the insiders until long after his death. And as Vogel tells us near the end of her article, Ames remains something of enigma, even today.

If you had to pick a race statewide that could determine what party has the majority in the New York State Senate, look no further than the 61st Senate District. Democratic candidate Joe Mesi is taking on Republican Mike Ranzenhofer in a very close and hotly contested race. 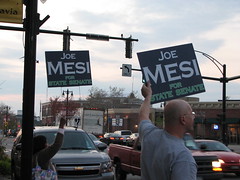 Tonight, Mesi held a gathering in Batavia. At left it was I encountered when I pulled up to park for the event. What I didn't get on camera was the half-dozen Ranzenhofer supporters that decided they would stand in front of the event's venue - Main Street Cafe - holding Ranzenhofer signs. Apparently they decided that since the Democrats had been doing it for awhile in front of their headquarters, they would do it on the eve of the election.

But inside the event was a great atmosphere. At its peak, the event had 40-50 people. There were people of all ages in attendance for pizza, mingling with Mesi and a nice enjoyable evening before Election Day.

Mesi also addressed the crowd. You can hear the bulk of his remarks in this video: 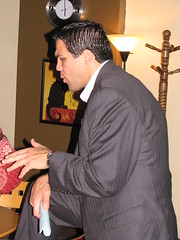 I remember first meeting Joe Mesi. That was nearly seven months ago. You could tell then that he was still learning. He was educating himself about the important issues and told the story that led to his candidacy. His brother lost his job at American Axle and that motivated Mesi to run for office.

Since my interview with Mesi, he has evolved into quite a candidate. His Plan for Change is pure genius. I say that because he put his platform into an easy-to-read booklet that was available at his campaign headquarters and handed out tonight at the gathering. Candidates usually use basic talking points on the stump or ramble on about what their policy positions are. Instead of doing that, Mesi decided to put his plans and his positions on paper for the world to see. That way, if there are any questions about where he stands, you can refer to the booklet.

posted by Howard B. Owens in Joe Mesi, Erie County.

A Republican elections commissioner in Erie County has sent a letter to the Genesee County district attorney asking for a local investigation into Citizens for Fiscal Integrity.

G. Steven Pigeon laundered thousands of dollars from Buffalo Sabres owner B. Thomas Golisano’s political committee and others in an attempt to conceal the origin and circumvent contribution limits, in violation of state election law.

“It has become apparent that the committee operating under the name Citizens for Fiscal Integrity may be participating in a nefarious and deliberate scheme to circumvent the financial reporting requirements of the election law,” Mohr wrote.

Any resulting probe could affect the Democratic campaign of State Senate candidate Joe Mesi, who benefited from Pigeon’s committee. Mohr produced a Responsible New York check signed by Golisano and designated on the memo line for “consulting” in the 61st District primary, in which Golisano supported Mesi.