Here is what your $25 donation gives you: When I heard there was going to be a Mexican Folk Art Festival in Batavia, I was excited about it, but I neglected to do one thing -- put it on my calendar.

The festival was March 19. The other day, Kelly Kiebala, director of GoArt, sent along a couple of pictures from the festival, and even though it's a little late, I thought them worth sharing. I'm hoping this is something GoArt will sponsor again in the future. posted by Howard B. Owens in batavia, GoArt, Roz Hayes. At one point in the 1960s, Roz Hayes wanted to have her work shown at an art show in the area, but a woman with the artist society in charge of the show told her no.

Hayes, who died June 24 at age 87, was painting modern, abstract works at the time, and the other artists in the society were painting still life, recalled her daughter, Pati Cultrara.

"She said, 'Your art isn’t welcome here. This isn’t what we want,'" Cultrara said. "My mother cried and cried and cried. She cried, because it was art, you know, because whether this lady liked it or not, it was art. "

Hayes, though, would keep painting, moving into ever more colorful motifs, creating work that many people wanted to buy, but few got the chance. Fifty years after that initial rejection, area residents who appreciate art, particularly the vibrant and expressive pictures of Roz Hayes can, at least one last time, take in a retrospective of her work hosted by GoArt! at Seymour Place, 201 East Main St., Batavia.

"With this exhibit you really get a feeling for the artist and for her evolution," said Genesee-Orleans Regional Arts Council Director Kelly Kiebala. "You can really feel how she really blossomed. It’s so colorful and it's really uplifting to look at her work. I think it leaves you with a really good feeling."

During the opening Saturday, Hayes' three children -- Pati, Nancy Cifelli and Tom Hayes -- were on hand to talk with gallery patrons about their mother's work.

They said Hayes started painting when they were elementary school age, though Pati recalled that her mother always seemed to have a visual sense.

"She would block things out, you know," said Cultrara, holding up her thumb like the prototypical artist. "She was always doing that while we were growing up."

At first, Hayes specialized in landscapes with earthy, natural tones.

Despite the rejection of one local artistic matron, Hayes began to find an audience for her work. People wanted to buy her paintings, so many of those early works wound up in the hands of local residents.

"I wish she didn’t sell as many as she did," said Tom Hayes. "We weren’t the richest people in the world and we actually needed the money. "Then it got to the point where she really hung onto her paintings.

"When we cleaned out her house, we found hundreds and hundreds of paintings. We found them everywhere, under beds, closets, you know, tables."

Hayes' later work, especially after her husband Edward died, became much more careful, and near the end of her life, she started her "Jazz" series, paying tribute to her favorite music.

"Whatever she loved in life, she put on canvas," Cifelli said.

Among the paintings the family found in her home after her death, Cifelli said, is one that is now her favorite -- it is of a young Nancy with a white horse she used to ride every summer.

"I never even saw it before," Cifelli said.

Asked what her highly regarded mother meant to her, Cifelli said she never thought of her that way.

“I appreciate her artwork, but I always looked at her more as my mom than as an artist," Cifelli said.

Pati, Nancy and Tom all describe Roz as a woman of great energy, a positive outlook and a multitude of interests.

"She had thousands of books," Cultrara said. "There wasn't anything she didn't want to learn."

While Roz loved New Orleans and its music, and was fascinated by the life of the place, the artist, who never traveled, never visited the cradle of all that jazz music she loved, Tom said.

While in her later career, Roz didn't sell much of her work, she did like showing it off, Cultrara said.

"She glowed (when she showed her work)," Cultrara said. "It meant that people felt it and they liked it and it made her glow. ... To her, art was filling, like when you’re full. You know, when you eat, you’re full. When she painted, it filled her with – well, she was full."

The exhibit runs through Feb. 15.

Tickets are $2 each or three for $5 and are available at GoArt! and online.

GoArt!'s 'Picnic in the Park'

posted by Daniel Crofts in batavia, pictures, GoArt, picnic in the park.

GoArt!'s annual 4th of July "Picnic in the Park" got a pretty good turnout this year, with families and people of all ages coming over to enjoy the food, shows and activities.

For those who missed it, here are some photos: Jonathan Oakes, viticulturalist at the Leonard Oakes Estate Winery, will visit GoArt!'s Seymour Place, at 201 E. Main St. in Batavia, on Tuesday, July 13, to talk about the art and science of winemaking. The event will last from 6 until 8 p.m. and costs $18 per GoArt! member and $20 per non-member.

Wine lovers will get to taste samples from the Oakes estate and enjoy a themed dinner to go along with the event.

Harpist Patricia Worrad will play at GoArt!'s Seymour Place, at 201 E. Main St. in Batavia, from 6 until 8 p.m.

Worrad will be playing traditional Irish tunes and classical pieces on a floor-standing lever harp, the design of which is based on the Celtic tradition. A themed dinner will also be served.

Advance reservation is required. The cost of the event is $18 per GoArt! member and $20 per non-member.

Tom Rivers, an author and longtime staff writer for the Batavia Daily News, will give a reading and presentation of his recently published book, "Farm Hands: Hard work and hard lessons from Western New York fields." A Q&A session will follow.

Poet Norm Davis will host an open poetry reading at 7 p.m. at GoArt!'s Seymour Place, 2901 E. Main St., Batavia. The event is free, open to the public, and includes refreshments.

Davis is the editor of Hazmat Review, a Rochester-based literary publication, and has hosted open-mike poetry readings at various locations in Rochester.

For more information, please visit www.goart.org or contact GoArt! by phone at 343-9313, or e-mail <[email protected]>.

GoArt! hosts 'A Conversation with Sybil Reisch,' author and mother of a special needs child

Sybil Reisch, the mother of a child with Down Syndrome, will speak in Batavia about her book  Journey with Jeff: Inspiration for Caregivers of People with Special Needs."

Reisch's message is geared toward parents, friends and professionals working with people who suffer from developmental disabilities, but all are welcome to attend.

Conversations with Calliope- Now What? 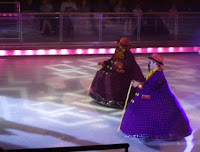 JOE: Good morning Calliope.
CALLIOPE: Good morning Joe. What's new?
JOE: Nothing much. I'm just considering plans for the winter.
CALLIOPE: Anything different about this one?
JOE: For one thing, I will be starting my Americorps placement in January.
CALLIOPE: The one at the Arts Council?
JOE: Yes, GoArt in Batavia.
CALLIOPE: Do you know what you will be doing there?
JOE: Not yet. We talked about some ideas. I will meet with the director on Wednesday to discuss schedules and goals.
CALLIOPE: Sounds interesting.
JOE: I'm looking forward to it. I have spent most of my time alone lately with my writing. It will be good to be back in circulation.
CALLIOPE: How will it affect your writing?
JOE: I imagine I will have less time and might need to plan better. I will try to include some creative writing in my duties at GoArt.
CALLIOPE: Good luck with it.
JOE: Thanks. Talk with you on Monday.