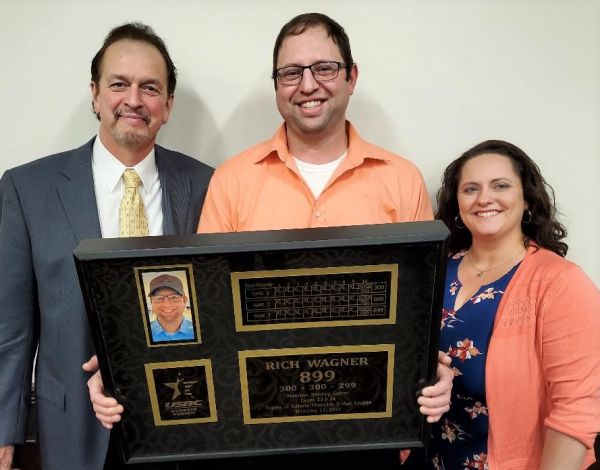 ARLINGTON, Texas – Lifelong Batavian Rich Wagner will share the men's National High Series Award for the 2019-20 season by virtue of the 899 series he recorded on Feb. 11 of this year in the Toyota of Batavia 5-Man League at Mancuso Bowling Center.

Wagner registered 35 consecutive strikes on lanes 23-24 before leaving the 6-pin on his final delivery.

All national leaders will receive an award from the USBC.

Charles Easton of Sylvania, Ohio, has earned the men’s USBC National High Average Award for a second consecutive season after putting together a near-record effort during the 2020-2021 season.

Easton, 30, posted the second-highest average in USBC history in the Toledo New Bath/Sparks Concrete league at Jug’s Bowling Center in Toledo, Ohio, finishing with a 259.56 average for 75 games.

Robarge, 19, recorded a 250.67 average for 78 games in the Junior/Majors league at Springfield’s Sunshine Lanes.

Robarge, the 2015 U12 Junior Gold Championships winner, made headlines earlier in 2021 after advancing to the stepladder finals at the USBC Masters in April, finishing in third place.

Potter, 18, earned her award by averaging 222.06 for 78 games in the Fairview Fri Juniors league at AMF Fairview Lanes in Fairport.

The women’s USBC National High Series Award will go to Brandi Kordelewski of Belleville, Illinois, after she set the women’s state record in Illinois with an 868 series on Nov. 18, 2020.

Kordelewski, 31, was competing in the Wednesday Night Ball league at Belleville’s Bel-Air Bowl when she rolled games of 290, 279 and 299

File photo: Rich Wagner, center, receiving his award from the Genesee Region USBC in May for his 899 series. At left is Tommy Kress of Hilton, guest speaker at the association banquet, and at right is Wagner's wife, Jennifer. Photo by Mike Pettinella. Mark Roth of Fulton, one of the greatest bowlers in Professional Bowlers Association Tour history and a member of four Halls of Fame, died Friday at the age of 70 due to congestive heart failure and complications following a diagnosis of pneumonia.

A 34-time PBA Tour champion, Roth had been in poor health after suffering a massive stroke in 2009 that left him partially paralyzed on his left side.

In 1980, he became the first bowler in history to convert the 7-10 split on a PBA Tour telecast, a feat that only has been accomplished four times since.

Among Roth’s PBA Tour titles were two major victories – the 1984 U.S. Open and PBA Touring Players Championship. He also went on to collect a pair of victories on the PBA50 Tour.

One of Roth’s biggest rivals on the lanes was fellow hall of famer Marshall Holman, but the two also were one of the sport’s most revered doubles teams.

They won three doubles titles together, and the PBA Tour schedule currently includes an event named in their honor – the PBA Roth/Holman Doubles Championship.

Roth is survived by his wife, Denise.

Photo above: Mark Roth, right, being inducted into the New York State USBC Hall of Fame in 2010 in Niagara Falls. Fran Bax, a director of the state association at the time, is at left. Photo by Mike Pettinella. And if it wasn’t for one stubborn 6-pin on the final delivery of the final game, Batavian Rich Wagner, one of the best bowlers in the Genesee Region USBC over the past 20-plus years, would have added his name to the list.

“On the last ball (on lane 24 at the 24-lane center), I was thinking just hit the head pin; don’t throw it in the gutter,” Wagner said. “My legs were shaking. I couldn’t feel them. I didn’t want to fall down on the lanes. It was just get it there. I tugged it just a little bit, but it could have gone.”

Wagner said he was grateful to have the opportunity to potentially etch his name into the record book.

“The more I’m thinking here, processing it a bit, I had a chance. I can’t complain,” he said. “I can’t get upset or anything like that.”

He said he used two different balls throughout the night -- a DV8 Turmoil II Solid on lane 23 and a Turmoil II Pearl on lane 24, balls drilled by Brian Green of Striking Effects Pro Shop last year.

“I was swinging 23 a little bit and I was pretty straight up the boards on 24,” he said.

Wagner said every ball was in the 1-2 pocket, some driving the 5-pin into the 10-pin (a “swishing” strike) but most packed solidly in the sweet spot. He said he caught a break in the sixth frame of game three.

“I drifted just a little to the right and hit the pocket a little soft, but a messenger came back (off the side wall) and ripped out the 7-pin,” he said. “Other than that, every shot – minus a few swishers – was just dead on.”

Wagner actually had three perfect games in a row in the league as he finished with a 300 last week in a 751 series on lanes 17-18. Ironically, he tripped a 6-pin on the last ball.

Tonight’s outburst raised his league-leading average to 236, and shattered his previous high series of 812.

"It was unbelievable and I'm really glad for Rich as he's just a great guy," he added. "You could see how very humbled he was by it, which says a lot about his character."

A sergeant at Albion Correctional Facility, Wagner said he appreciated the support he received from his teammates – Tom Fluker, Matt Buckley, Leon Hurd and Nathan Cordes – as well as from the other league bowlers.

His team won its match against the Eastown Beverage team of Geoff Harloff, Jim Pursel, AJ Allenbrandt, Mike Johnson and Matt Balduf -- rolling 3,334 scratch with Cordes chipping in with 697. Pursel rolled 697, starting with a 279 game, for Eastown Beverage.

“It didn’t get all quiet. They kept it loud and not making it as nerve-wracking, even though it was,” he said, adding when the messenger took out the 7-pin in the sixth frame, “I didn’t feel my legs the rest of the night.”

One of those who was looking on was Wagner’s wife, Jenn, who bowls with another team in the league.

“I hid behind two people so he wouldn’t see me,” Jenn said. “It was pretty amazing. Afterwards, I told him it didn’t matter whether he got that last strike or not because it was incredible either way. It’s bittersweet, but incredible at the same time.”

In my Jan. 18 column, I shared information about the reclassification of leagues by the United States Bowling Congress – the national governing body's analysis of bowler averages that could result in a “Standard (or House)” shot league being changed to a “Challenge” or “Sport” league based on data derived from bowlers who participated in multiple leagues during the 2016-17 season.

While I support the USBC in its effort to even the playing field when it comes to rating bowlers equal to their skill levels, I am not on board with the way the USBC handled a situation that targeted 704 leagues for possible reclassification.

USBC sent letters out of the blue to these leagues, causing a great deal of anger and confusion. This I know because I was copied on the letters from USBC to 39 leagues in New York State (and on several of the appeals from league officials that followed shortly thereafter).

What the USBC should have done was to inform its membership as a whole in advance about the process, letting everyone know that it had been studying averages from last season and that if a league had at least 20 percent of its members who bowled in multiple leagues, it could be subject to reclassification.

(Bowlers with league averages designated as “Sport” or “Challenge” are indicated as such on bowl.com, and are subject to using the conversion charts when entering leagues or tournaments bowled on “Standard” oil patterns).

So, instead of informing bowlers with a message on bowl.com and/or an e-mail blast that this was going to happen and of the appeal process, the USBC blindsided its bowlers (and this is not the first time).

Only after witnessing the negative reaction from league officials for several days did the USBC Executive Director Chad Murphy then shoot off a letter explaining the rationale for its action and acknowledging that other factors could be involved in a league’s scoring pace (bad pins, faulty oil machines, inconsistent maintenance, etc.), before ending with “I hope this letter helps you understand what is going on.”

Talk about shutting the barn door after the horse has bolted!

To date as a result of appeals, the USBC has decided not to change many of the 700 leagues that were targeted. In New York, at least 22 of the 39 leagues identified for reclassification have been kept as "House" leagues.

In the future, I would hope that the USBC brain trust would think things through to avoid alienating its membership base, especially considering that a decade-long trend of declining membership continues.

Results of tournaments in the Genesee Region over the past couple weeks:

The event drew 43 teams and raised $1,540 for Genesee Cancer Assistance.

Other cashers were as follows:

Zinone qualified in the eighth position with 949 for four games. Kevin Donovan of Painted Post was the high qualifier with 1,024.

Steve Santini of Mount Morris was the only Genesee Region USBC bowler to make the top 24, qualifying through the one-game, “last chance” squad with a 237.

The field included some of the top bowlers in New York State, including professional Ryan Shafer of Horseheads, Mike Rose Jr. of Rochester, Ken Muscato of Canandaigua and Dan Vick of Rochester.

The Lockport-area duo of Gary Kinyon and Jason Ciliberto defeated the Batavia-area duo of Matt Balduf and Rich Wagner, 465-395, to win the $700 first prize.

Thirty-one teams competed in the tournament, which featured six-game qualifying where bowlers alternate frames. From there, the top eight teams advanced to two-game eliminator style finals where half the field is eliminated in each round.

Other local teams cashing were Batavian Gregg Wolff and Brian Green. Tom Fluker of Batavia and his partner, Lowell Schoonmaker of Florida, combined for a 300 game.

Open to current GRUSBC members with at least 21 games in a particular league, the tournament offers a first prize of $525 plus a champion’s ring (based on 80 entries).

The entry fee is $50, and re-entry is allowed provided the re-entry does not prohibit a first-time entrant from competing.

Registration can be done online by going to www.crossroadshouse.com and choosing the Events tab.

All proceeds from the bowling as well as numerous raffles over the weekend will go to benefit Crossroads House, a comfort care home serving the residents of Genesee and Wyoming counties who have been medically determined to be in their last stages of life (three months or less).

-- The 12th annual GRUSBC Youth Team Tournament is set for Feb. 17 at Le Roy Legion Lanes, with squads at noon and 3 p.m.

Only a few spots remain as the maximum number of teams in the event is 16. Each team consists of four bowlers.

The entry fee is $64 per team.  Scholarships will be awarded to the first-place teams in each of three divisions, based on team average.

Rose Garden Bowl I continues to lead the 13-team league by 4.5 points over Batavia Strike Force, with Oak Orchard Bowl I another 13 points back.

In recent action, Josiah Yantz of Scopano’s Lanes led the way for the boys with a 242 game and 682 series, while Paige Snook of Oak Orchard Bowl I led the girls with a 214 game and 563 series.

I'm pleased to welcome a new "Pin Points" sponsor this week – Neo-Tac, Inc., which is owned by scientist and avid bowler, Frank Bernabei of Middleport.

Bernabei’s company specializes in bowling ball surface management products, such as Hook-It, Renew-It and Liquid Nitro, as well as lane conditioners and cleaners. Just click on his ad to learn more.

And while you’re at it, click on all of the ads on this page and support those businesses that help keep the sport of bowling in the news.