Above: Byron-Bergen Volleyball players each hold one off the potatoes they personally cleaned and prepared at the annual “potato scrub.”

Bergen -- One Saturday morning each September, the Byron-Bergen Girls Varsity and JV Volleyball teams meet in the Bergen Evangelical Presbyterian Church parking lot at 9 a.m. There, they join other members of the community to wash, scrub, dry, sort, pack and load approximately 2,000 pounds of potatoes.

“There are a lot of ways athletic teams can be charitable and this one is not glamourous,” said Byron-Bergen Athletic Director Rich Hannan. “Every year these players tackle this project with good will and good humor and no fanfare. I am extremely proud of them.”

The "potato gleaning,"(correct, with a g) as it is officially called, is orchestrated by Stewart Freeman. He has worked with area farmers for the last decade to collect extra and post-harvest crops including potatoes, butternut squash, onions and cabbage. He stores the produce and makes deliveries to shelters, food pantries and local families.

“What we’re doing is helping people who can’t afford to buy food get the chance to eat,” said senior VarsityVolleyball player Cynthia Morse. “That makes me feel happy.”

The “scrub,” which the volleyball players take part in, is crucial to this process because as the soil is scrubbed from the potatoes, spoiled spuds are identified and sorted out. If bad potatoes are packed with good ones, they will contaminate the entire box, making the food inedible.

“We all participate, both Varsity and JV players,” Catalino said. “It’s a team bonding activity. We work together and get to know each other better while helping the community.”

Eventually, Freeman will deliver the potatoes that the volleyball players helped prepare to local soup kitchens and food pantries, including the Open Door Mission in Rochester, the Batavia Salvation Army, and local organizations that deliver food to veterans and community members in need. Care-A-Van Ministries is partnering with FoodLink of Rochester and the Batavia Assembly of God to host a mobile food pantry. The exact food items available are not known, but fresh produce will be available. The Mobile Food Pantry is available to Genesee County residents only. There is no income verification required, but you must be 18 years old to pick up food from the pantry. Please provide your own bags/cart/vehicle to transport items to your home.

Dine in a former B & O Train Depot. Take a step back in time to an era of home cooked meals served by a friendly staff in a relaxed atmosphere! Batavia area senior citizens and youth got together last week to celebrate their outstanding service to the community. It was a mutual admiration society with a broad age range.

The "Minnie Tea Celebration" was held by the Retired Senior Volunteer Program in conjunction with the Genesee County Youth Bureau. It took place at the Senior Center on Bank Street in honor of RSVP volunteers who helped the Genesee County Health Department at the end of 2009 as well as teens who planted and cared for an indoor garden for the Minnie Garden Project. RSVP volunteers served the health department by distributing flu vaccines -- both seasonal and H1N1 -- and by performing other tasks such as nursing, paperwork and triage. Thanks to the diligent work of these hearty seniors, the GCHD managed to issue over 6,000 doses of the vaccine by the end of 2009. Meanwhile, area high-schoolers got to try their hands at gardening with the help of Cornell Cooperative Extension Master Gardener David Russell. He was beaming with pride at the tea party and couldn't say enough about the students' dedication to the Minnie Garden Project.

"I'm so proud of the job these kids did," Russell said. "These are kids with different backgrounds who came together and did an excellent job. I'm really proud of them."

In addition to being awarded certificates, the youths were given the honor of having their produce served as hors d'oeuvres at the tea party.

The party was funded by a grant written by 22-year-old former Youth Bureau member Vicki Ripper. Since she finished working at the bureau in November, AmeriCorps Vista volunteer Lauren Paluta and Youth Bureau employee Angela Barbeau have taken control of the program.

Paluta put together last week's event with RSVP Coordinator Dorian Ely. Paluta was the hostess in Ely's absence and, together with Barbeau, she presented certificates of appreciation to the senior and youth volunteers. In the last two photos, Hannah and Leah Rosenbeck hand out decorated terra cotta flowerpots to the seniors as they return to their seats after receiving certificates. See the article on RSVP's intergenerational project for more information on this. 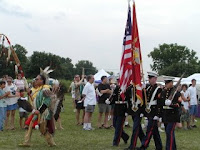 (Ganandagan Festival Parade)
JOE: Good afternoon Calliope.
CALLIOPE: Good afternoon Joe. Where have you been?
JOE: Exploring community service opportunities.
CALLIOPE: Oh?
JOE: I told you I was feeling a little confined just staying home writing and applying for AmeriCorps. Today I visited one of their participating sites and formalized my application as well.
CALLIOPE: What did you learn?
JOE: The rules for one thing. I won't bore you with the details. I did explore one project which fits my interests.
CALLIOPE; Tell me about it.
JOE: It is a project which tracks patterns of people involved in the criminal justice system.
CALLIOPE: Is that it?
JOE: No. The other part is to find funding to develop programs to meet the needs of the people identified.
CALLIOPE: Sounds ambitious.
JOE: That's what I thought. It would mean a full time commitment, perhaps a bit more than I am ready for.
CALLIOPE: So now what?
JOE: I will spend some time thinking about it and perhaps exploring some other alternatives. Talk with you tomorrow.

Leaders by Example - ND Faculty and Staff Practice What They Preach!

ND Faculty and Staff members spent their November 10, 2008 Staff Day doing exactly what we expect all of our students to do - expanding their comfort zones and participating in service activities in the City of Batavia.

Organized by ND Campus Minister, Mrs. Kate Scanlan, ND faculty and staff members journeyed to the Genesee County ARC Trash Recycling Center, the City of Batavia Youth Center, the
Agri-Business Day Care Center, Crossroads House as well as the Genesee County Nursing Home to “lend a hand” and help others in need! Participation ranged from sorting recyclables on the assembly conveyor line, helping to clean the Youth Center, taking care of, and interacting with the kids at day care and visiting residents in the nursing home.
Faculty and staff members returned to ND for a delicious lunch prepared by ND Cafeteria cook Nadine Netter. The day’s activities culminated with mass celebrated by Father Jack Mattimore, S.J., ND Theology 12 instructor, in the chapel. Please check out our web page [www.ndhsbatavia.com] “Photo Gallery” for pictures of ND faculty and staff in action!