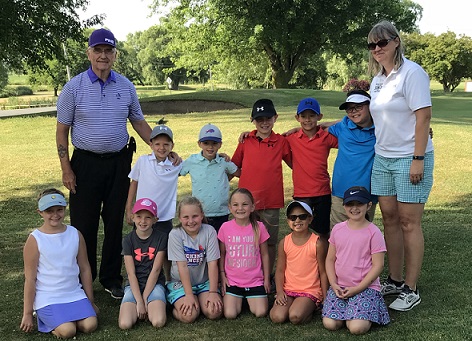 The Pee Wee players experienced one day with a little rain, but overall it was a great week for golf!

The Friday Tournament saw Owen Glazier dominate the boys' division; he medaled with a score of 29. The girls' division was a close contest, with Riley Yunker prevailing by two strokes over Roane George. 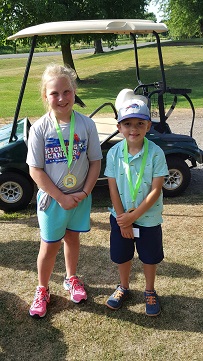 This was Riley's second championship medal in two years!
Closest to the pin winner on hole 13 was Roane George, and on hole 17 the winner was Brayden Jachimowicz. The long drive winner on hole 14 was Owen Glazier.

The kids had fun, and we hope to see them all next year. 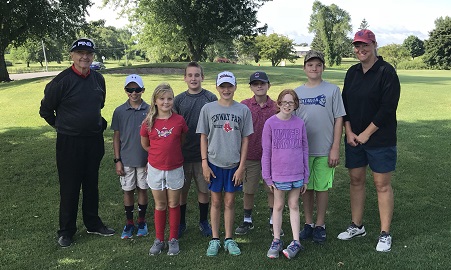 We had great weather all week for these kids, and they played very good golf.

Closest to the pin winner on hole 13 for the boys was Ryan Muscarella, and for the girls it was Lily Davis.

Closest to the pin winner on hole 17 for the boys was Ryan Muscarella, and for the girls it was Lindsey Betters.

The long drive winner for the girls on hole 14 was Michala Falkner, no boys hit the fairway. 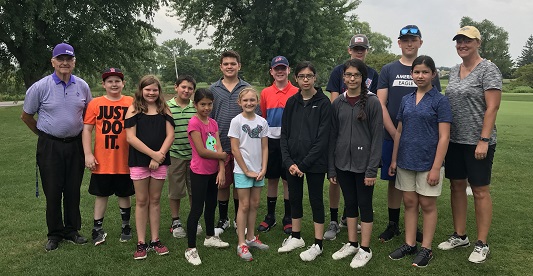 We were concerned about the weather for this week of camp. Rain was projected for every day, but we got through the week without a drop!

We had some high drama at the Friday Tournament. Will Fulton and Sam Dinsmore tied with a score of 39 and we had a playoff from 100 yards on hole 18. Both boys hit the green with fine shots, and Will Fulton prevailed with a birdie. In the girls' division, Amelia Frens shot a 44 to edge out Jada Fite by one stroke.

(Left: Will Fulton and Amelia Frens)

Closest to the pin winner on hole 13 for the boys was Sam Dinsmore, and for the girls it was Riley Prunner.

Closest to the pin winner on hole 17 for the boys was Brennen Pederson, and for the girls it was Emily Frens.

The long drive for the boys was Sam Dinsmore, for the girls it was Jada Fite. Children and their families dealing with cancer often need an extra ray of sunshine and that's the purpose of Maria’s Sunshine and Dreams fund, which is the focus of a golf tournament July 29 at the Batavia Country Club.

There is still time to sign up for the sixth annual tournament, said Sarah Christ, Sunshine and Dreams Fund board member.

The fund is made possible through donations and the annual golf tournament, which typically funds the program for the rest of the year. Registration for the golf tournament can be found on their website here and any questions can be directed to [email protected].

“Many local people come and golf in the tournament and we are constantly looking for donations and big-ticket items as well,” Christ said. “We are new and we are trying to get our name out there.”

Maria’s Sunshine and Dreams fund was started in honor of Christ’s friend, Maria Nash Anderson, who lost her battle with cancer in March 2012 at age 25. Anderson served on missions trips while attending Roberts Wesleyan College, and worked as a youth caseworker for the Genesee County Department of Social Services. Christ said she loved children and wanted to make a better life for other children.

“We thought this would be a great way to keep her memory alive,” Christ said. “We want to help other families going through difficult times by providing sunshine to them.”

Christ helps to personalize each gift by speaking with friends and family to find out the children’s interests and personalities.

“We’ve done WWE live event tickets for one boy, a spa day for a little girl, and other things, too,” Christ said. “We try to include the siblings and other family members as well because they’re going through this, too.”

Missy Sacheli, mother of “Sunshine Kid” Joseph Sacheli, said the organization brings happiness, comfort and smiles to those who need it most and they will be forever grateful they were chosen to bring sunshine to.

“The Sunshine organization was an unexpected ray of light for our son during a really difficult and dark time,” Sacheli said. “They are thoughtful and take into account each child’s interests and likes. My favorite part about them is they allow kids to focus on being kids...instead of the setbacks they are working to overcome.”

Almost all of the sunshine stays in Genesee County, but Christ said they do branch outward to surrounding areas to help other children.

In the past, Maria’s Sunshine and Dreams fund has given a lot of the proceeds to Ronald McDonald House of Rochester to be used as a separate fund for families to have fun in Rochester while they were in the area and provide meals once a week. Christ said they realized they needed to keep the money local, so most of the funds go to local families now.

“We want to try to help more kids in the area and spread the word around more than we have in the past years to get support in the community,” Christ said.

Christ is hoping to continue growing the organization to give the children bigger and better toys, as well as help the parents provide more necessities. The organization started in Rochester but was brought back locally about four years ago. Since then, Christ said they have helped more than 20 children and their families, and the number is growing.

“We try to help any kids from the age of a preemie baby whose family has to go back and forth to the hospital, or a kid with a severe or daily medical issue,” Christ said. “We focus on the kids' needs and what they love and try to use that to personalize each basket. Every basket is completely different.”

Dawn Logsdon, mother of “Sunshine Kid” Roger “Bubba” Logsdon said it is a phenomenal organization that has a unique way to brighten kids’ days and put smiles on faces that have every reason not to smile.

“The kids [Maria’s Sunshine and Dreams Fund] help have been dealt a terrible hand and [the] organization gives them the “wild card” that keeps them motivated to keep getting better and stronger,” Logsdon said. Sponsored Post: Join us for a Father's Dad BBQ at Batavia Country Club Genesee Cancer Assistance held its annual gofl and bocce ball tournament at Batavia Country Club yesterday. This year, in memory of Joe Gerace, one of the agency's founders and a tireless supporter and volunteer.

There were 97 golfers and 18 bocce ball players, plus 30 volunteers, on hand for the festivities.

The event raised more than $15,000 for Genesee Cancer Assistance. Golf Against Cancer Golf & Bocce Tournament will be held at the Batavia Country Club on Friday August 18th, 2017. An 18-hole course has a links type flavor to it with it's wide fairways and large, undulating greens.

The watered fairways provide an even test of golf for all levels of skill. You'll love the scenic panoramic views you will be afforded during your round, especially on the back nine where you can enjoy a breathtaking vista of the entire course.

For the golf tournament: this is a 4-person scramble tournament. Hole-in-One prizes on all par 3 holes. Putting contest. Mulligans (can be used anywhere EXCEPT Par 3 holes) and Skins available for purchase at event.

Sponsorship Opportunities: If you, or your business would be interested in sponsoring this event, please contact the GCA office at (585) 345-0417. For more information, visit our site Above, Andy Squire, of Spencerport, hits a shot off the first tee. posted by Jamie Lindsley in Oakfield Historical Society, batavia country club, Oakfield Museum and Research Center.
Event Date and Time:
June 20, 2015 - 12:00pm to 8:00pm
GOLF FUNDRAISER FOR NEW ROOF ON RESEARCH CENTER Golf Outing Package - $65.00 per person 4 Man Scramble Longest drive for men / women Closest to the pin for men/women Includes 18 holes with cart, lunch at the turn, followed by pulled pork dinner with sides and dessert. At Batavia Country Club: 11:00 AM registration 12:00 AM shotgun start... At Oakfield Fire Department: 6:00 PM dinner 6:30 PM Chinese Auction ***Tickets also available for the dinner only (without golf) for )$10*** ***Chinese auction open to the public at 5:30. Tickets are $5 per sheet.*** McCarthy was an avid athlete who died in a car accident in 2006.

A field of 144 golfers along with 60 sponsors are raising funds to support athletics in Batavia, including hockey scholarships, Little League, and helping economically disadvantaged families get their children into hockey. Batavia Country Club now has live entertainment on Friday nights from 8 p.m. to midnight. There's a small cover charge, with drink specials and food available. The full winter lineup can be seen at <http://bataviacc.com>

Here's the upcoming schedule for the live bands at Batavia CC:

posted by Bill Schutt in Batavia Downs, batavia country club, golf, Mercy Flight.
On Sept 14th Mercy Flight and the Batavia Downs will host the 3rd Annual "Hackers for Helicopters" fund raiser at the Batavia Country Club. This year’s event will also host a "Fire/EMS Challenge" where first responder foursomes will compete for a Trophy, Helicopter landing and all important bragging rights. Come on out and enjoy a day of golf at beautiful Batavia Country Club, dinner and drinks at the Downs and all important fundraising for your favorite community based non-profit. http://www.mercyflight.org/event/100046/hackers-for-helicopters

Here it is, my first video!

I went out to Batavia Country Club Wednesday morning to talk to some folks about playing after the warm weather goes away.